Posted on April 13, 2021 by katiequirkauthor

Many thanks to teacher extraordinaire Eric Bloomstein and his wonderful students at Reed Academy for an enjoyable school author visit. These guys asked great questions and clearly had thought deeply about A Girl Called Problem.

I’m delighted to see A Girl Called Problem listed among other great books on the Children’s Book Council’s Champions for Change List (Spring 2020). 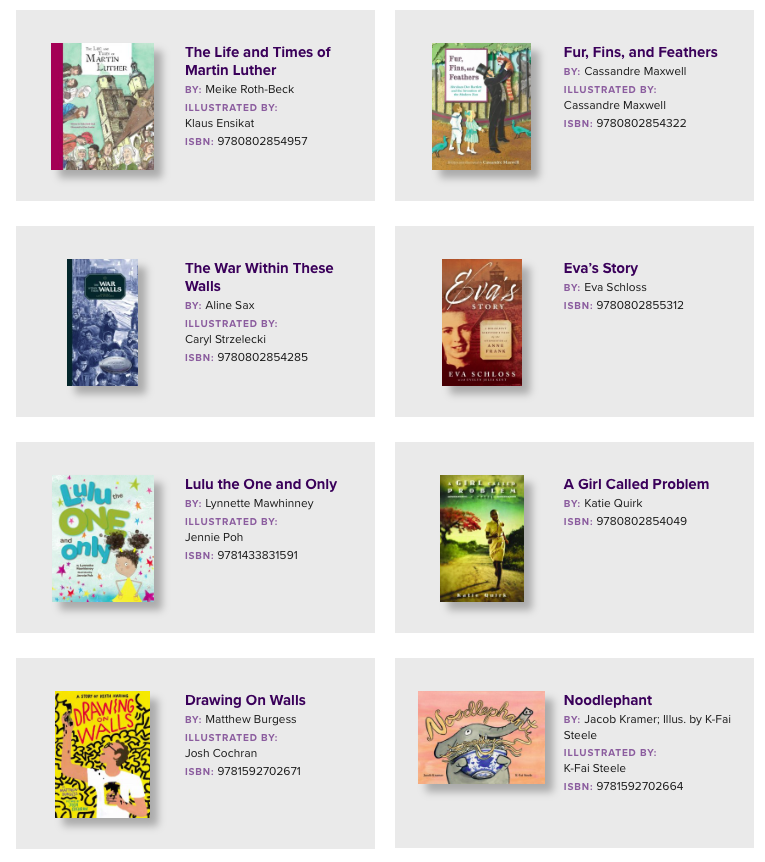 I know we’re all hoping for healthy growth and change to come from this period of social distance, loss, and hardship. I also find myself thinking of the art it has and will generate:  new murals, music composed over Zoom, homemade masks, sidewalk chalk messages, songs sung from balconies, and pop-up fine art. Times like these highlight the societal value of art as a tool for generating connection, inspiration, and understanding.

Last week I published an essay in The Washington Post about some of the art my family created to bring color and joy to our neighborhood as social distancing set in and winter lingered.

The full article can be found here. We had so much fun with this project. If you get a chance, leave a comment about art–whether your own or someone else’s–that has brought you joy during the pandemic.

Stay safe and well. All the best, Katie

The logistics: publishing articles and essays

Posted on May 8, 2018 by katiequirkauthor

A couple of weeks ago I put in a plug for the writers’ podcast, Launch. Host and author John August walks listeners through his process of producing a middle-grade novel from start to finish and answers all sorts of logistical details about contracts, cover art, agents, editors, and even fonts.

This week I promised to share some of the lessons I’ve learned publishing articles and essays. I am by no means an expert, though I’ve had some success, publishing in places like The New York Times, The Washington Post, Slate, and The Christian Science Monitor. Probably my most important credential is that I’ve gotten quite comfortable with rejection–a necessary part of the process.

After participating in a March for Our Lives event with my kids, I wrote this essay for Yes! Magazine.

So, let’s say you’re interested in selling some short-form writing. I can suggest these steps:

I recently published this travel feature, based on a family trip, in The Boston Globe.

Good luck and leave comments below if you have any questions or links to successful publications for us to celebrate.

A perfect podcast for publishing

Posted on April 23, 2018 by katiequirkauthor

Have you ever committed to a regular writing practice, perhaps pulled together an essay or the first few chapters of a novel that felt pretty polished, but then wondered, “How on earth do I get this thing published?”

When I do school author visits or teach writing seminars, questions about the logistics of publishing routinely come up, and for good reason. Commercial publication requires not just honing your craft as a writer but often writing query letters, connecting with agents or editors, and more often than not getting very comfortable with rejection. In a couple of weeks, I’ll write about my experience with commercially publishing essays and articles.

But if your interest is in publishing books I want to put in a plug for a fabulous podcast called Launch. Host John August describes his experience from start to finish of proposing, selling, writing and publishing a middle-grade novel. Along the way he provides answers to important questions about all sorts of topics: Will I need an agent? How do I find one? Can I get a contract without a full manuscript?

Because questions about the logistics of publishing have little to do with the creative process of writing, their answers can sometimes feel a bit boring: “Well, there’s this website called Publishers Marketplace, and what you do is….”And yet August manages to provide all of the answers I’ve ever heard about publishing fiction while still making his story fun to listen to. I binged on this podcast when I discovered it a couple of months ago!

Check back here in a couple of weeks for a post about my experience publishing articles and essays and the logistical lessons I’ve learned. In the meantime, download the first episode of Launch.

Posted on March 19, 2018 by katiequirkauthor

Three cheers for the youth of America who are insisting that the U.S. engage in real conversations about gun violence. I hear and admire you!

Part of what inspired me to write A Girl Called Problem–a novel about courageous young people standing up to adults—was watching students in Tanzania challenge corruption at the university where I taught. These students wrote letters, petitions, and newspaper editorials. At first the university threatened to take away their scholarships or even to kick them out, but these young people could not be deterred. Eventually the administration was forced to own up to its own corruption and to change.

This week my kids and I made drawings to put on posters advertising our town’s Youth March for Our Lives event happening on the 24th of March as part of the larger national gun-control movement (find your local march). Here are a few of our drawings:

Liam, age 10, challenges us to consider whether the Founding Fathers would approve of common citizens carrying automatic weapons.

Reid, age 8, believes no child should risk death by a gun, and though he’s young, he’s not naive. Many countries have greatly reduced gun deaths by introducing strict gun laws.

Young activists, keep up the good fight! Facts are on your side–higher rates of gun ownership lead to higher rates of homicide and suicide–but right now gun-lobby money and politics are getting in the way of legal reform. This isn’t the first time cynical adults have claimed change isn’t possible, but it is another opportunity for youth to stand on the side of justice and to prove us wrong. Thanks for all you are doing!

Posted on January 26, 2018 by katiequirkauthor

My essay about building a sleep machine for my infant son, Liam, was published today in The New York Times. 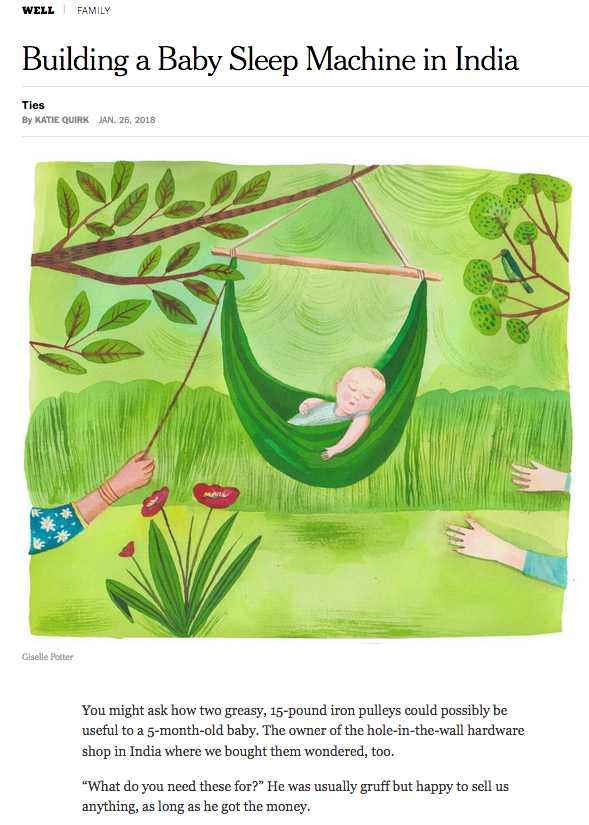 I hope the full essay (found here) provides you with a few good laughs. You might also get a kick out of the video I posted at the end of the previous post. It depicts the baby sleep machine–pulleys, ax handle, and all–in action.

Posted on January 24, 2018 by katiequirkauthor

I’m working on two books at the moment: Kurinji, a young-adult novel set at a boarding school in the mountains of South India; and Sari Swinging: One Mom Opts out of the American Work-Family Grind, a parenting memoir about raising my son for the first two years of his life in India. 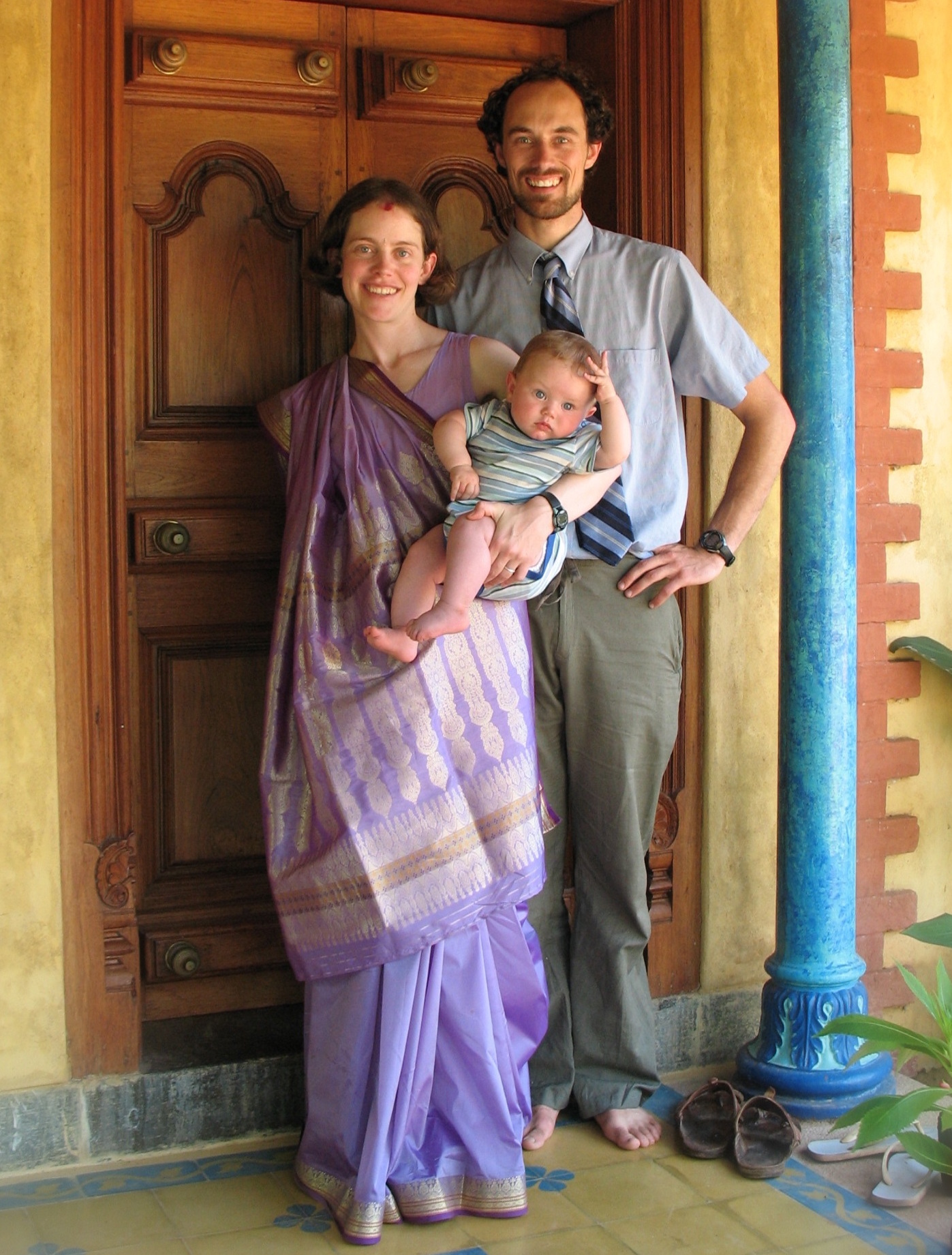 The New York Times will soon be publishing an essay excerpted from the memoir. It’s about a sleep machine my husband, Tim, and I rigged up for our son, Liam, back when he was an infant in India. For the first three months of his life, Liam had colic and the only way we could get him to sleep was on one of our chests with an adult thumb plugging his mouth. When the colicky crying finally ended, we should have sleep trained Liam, but instead we dug ourselves into progressively deeper holes, eventually building Liam a sleep machine out of pulleys, an ax handle, an old sari, and a spring.

Apologies for the poor video quality–it was 2010 and we were poor graduate students with a cheap camera. Regardless the video will give you a sense of what we were up to: no good, at least on the firm parenting front, though, boy, did we ever look smug. I’ll share the essay when it publishes.

Posted on January 8, 2018 by katiequirkauthor

A year ago, my family and I were in Granada, Nicaragua, riding on chicken buses, swimming in geothermally-warmed waters, peeking into a caldera flowing with molten lava, and generally enjoying la vida nicaragüense. As we settle into the latter part of winter (at least where I am now in North America), I thought you might enjoy reading this article I wrote for The Los Angeles Times about our visit to this old Spanish colonial capital.

My family’s trip to Granada was part of a larger year we spent in Central America. I blogged about our time abroad at Warmer Than Canada, my website about family gap years abroad. Soon I’ll be wrapping up my reports from our year abroad with a final post about our return and readjustment to life stateside, but in the meantime I hope you enjoy this glimpse of Nicaragua.

Posted on November 6, 2017 by katiequirkauthor

An interview done by Scott Simon on NPR with author Claire Messud about her novel, The Burning Girl, recently caught my attention.

The novel is a story of adolescent friendship, but it’s not labeled as YA. This distinction had me thinking of other novels I’ve enjoyed in the last few years in which the protagonists are not grown ups, but the readership is generally intended to be adult: books like Tell the Wolves I’m Home and We Are All Completely Beside Ourselves.

Simon asked Messud if anyone gave her trouble about her intended audience and how the book should be labeled. Her response:

When I was growing up, and maybe when you were growing up, too, YA was not a category that existed. There were books about young people. There were books about older people. And there were children’s books that were frankly written for children. But, otherwise, books were just for people. This is a book that is as much for a parent as a child, is as much for a teenager as a grandmother or a grandfather.

It’s a book about what it’s like to be alive and be human, I hope. For me, at least, and for the people – everyone around me that I know – these years are so formative and so central to who we become and how we interact with other people as adults in the world – that to see them as something only of interest to teenagers or adolescents themselves – I think that’s just missing so much of reality.

People often ask me what my target audience is for A Girl Called Problem, perhaps because the premise piques adults’ interest (a girl looking to challenge gender roles in rural, 1960s, post-independence Tanzania), but the protagonist is a kid. My simple answer: the publisher labels the readership as 9-13-year olds, but many of the readers I hear from are adults.

I’m delighted the young-adult and middle-grade genres have exploded since I was a child. There are so many books out there now that have the potential to feel truly relevant to a whole spectrum of young readers: nerds, cool kids, outcasts, struggling readers, action lovers, unusually mature (or immature) kids, poets, artists, city kids, hicks. But I also believe that really quality literature, whether it’s written for kids or adults, transcends age, as Messud suggests.

I’m revising a young adult novel right now, one set in the mountains of South India, and as I rework the dialogue or my descriptions of the feelings of the protagonist teenager and of her friends, I’m aiming to depict what feels like an authentic teen experience, but ideally also one that will feel interesting and fully human for adult readers. That’s a tricky balance. I encourage you to listen to the interview with Messud and to consider what you think makes young-adult and middle-grade fiction unique.